The Vanilla Bee and Vanilla in Maui & Hawaii 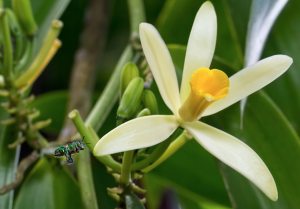 Vanilla is an orchid, native to Mexico and Guatemala. Vanilla does not come from a tree it is a long vine that grows up into trees. The vanilla orchid produces a pale yellow flower, with a mild fragrance that does not smell like vanilla. This vanilla flower opens only once for a few hours before closing and falling off the vine. Orchids can not pollinate themselves. If the flower is not pollinated before closing it will never produce a vanilla bean.

Vanilla is pollinated one of two ways, either by human with is a very laborious and tedious task or by a bee, the Melipona bee, specifically. This is a true bee, it is very small and does not sting. This bee does not exist on Maui. Yet, we still grow a fair amount of Vanilla beans here. 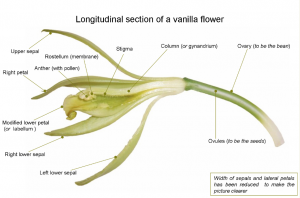 The Melipona bee is the only creature we know of that knows how to pollinate vanilla. You see, pollinating vanilla is a little tricky. There is a tiny flap inside the vanilla flower called the rostellum that acts as a barrier between the antlers (Male parts) containing the pollen and the Stigma (female parts) of the flower. The rostellum (flap) needs to be lifted or removed and the pollen has to be carefully taken and placed on the female part of the flower. This has to be done with a steady hand and a tiny stick, carefully. If the flower breaks off the vine – Game Over!

In a perfect scenario the little bee pollinator would climb into the flower get a little bit trapped and break the flower’s rostellum in order to get out of the flower and during the process the flower would be pollinated.

How do we know about the little bee’s relationship with Vanilla? I mentioned before that vanilla is from Mexico. In the 1500s samples of the Vanilla orchid vine were taken from Mexico to Europe in hopes that Europeans could grow Vanilla too. Hundreds of years passed and the Europeans still were not producing Vanilla Beans. So some Europeans headed back to Mexico to observe the Vanilla growing so abundantly. The main difference that was noticed between the vanilla growing in Europe and that of Mexico was the presence of the little bee visiting the vanilla garden in Mexico. That same bee  was nowhere to be found in the European garden.

As mentioned previously, the endangered Melipona bee does not exist on Maui.  By now it becomes clear to understand why the price of Vanilla continues to rise. In short, there are fewer vanilla pollinating bees than there used to be and the demand for vanilla continues to rise.  Nearly all the vanilla beans available world wide have been pollinated by human hands. This goes to show the effect a tiny creature can have on the Earth. 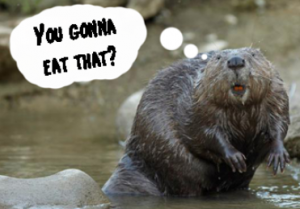 There are alternatives to using real vanilla in our recipes. “Butt”, you’re not going to like it… The artificial vanilla flavoring is called castoreum and it is a product of the North American Beaver. The FDA considers this ingredient to be Generally Regarded As Safe (GRAS) so it can be listed as a “Natural Flavoring” on the ingredients list of prepackaged food. So, let me share with you what I learned. You are going to want to be sitting down for this. Castoreum has nothing to do with the castor bean plant. It is a yellow/brown substance used by beavers to mark their territory. I kid you not. It comes from a gland at the base of the beaver’s tail and it may contain also contain fluids from the nearby anal glands and urine. By the way, Bees are not related to “Bee”-vers!

So in closing, we can all agree that positive change in the world begins with each one of us doing our part. We must respect our Island, the Earth, and all of her beings.  The vanilla bee is not the only bee in trouble. Hopefully, we can learn from the impact the loss of the melipona bee has had on our lives. More bees mean more reasonably priced for for all. Less bees = more expensive food. Even less bees = NO FOOD. Here are 11 Ways to be Good to the Bees. Give Bees a chance!