Interestingly, I was planning on doing a story this week about snakes that currently exist on Maui. But, not this kind. Then this morning, I saw a report by Maui Now that a Boa Constrictor was found by a farm-worker on Oahu along Kunia Road, last week. 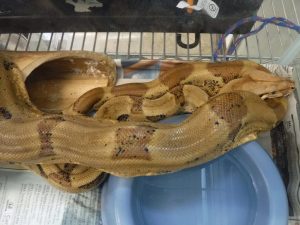 I read some of the comments on the news report threads, that is sometimes where I find the interesting part of  the story. From reading these threads it was obvious that there are a few people in fear for the immediate safety of their children. Readers chimed in that this snake would grow to “30+ feet in length,” Yes, some Anacondas (a different kind of snake) do get close to 30 feet in length but this is not that.

To be clear, the snake is in custody at the Department of Agriculture.   It is illegal to own snakes or bring them to the Hawaiian islands.  Anyone doing so is subject to jail time and up to a $200,000 fine. Maui and all of the Hawaiian islands have a delicate ecosystems that need to be protected from all invasive species whether animal or plant.

My intention here is to prevent fear by sharing some knowledge from my personal experience. I realize there are many people that have lived on these islands their entire lives and may never seen a snake outside of a zoo, if they have ever seen one at all. I understand we as humans are often fearful of what we do not know. So please allow me to share some information that I have learned on my journey.

Snakes are cold blooded reptiles. When their bodies get cold their metabolism slows and they eat way less. If they get too cold the metabolism stops and they die. In warmer climates the metabolism speeds up and they eat more. More eating means faster growing. The size a snake can grow to is based on species not food consumption. As snakes grow they need to shed their skin. The faster they grow the more frequently this will occur.  Shedding of the outer layer of skin is called molting. During a molt they become vulnerable as they are unable to see very well once the skin over the eye becomes cloudy which happens prior molting.

Snakes are typically either Constrictors or they are Venomous:

Constrictors, such as boas (like the one found), pythons, anacondas, etc. squeeze their prey to death by cutting off the animals blood supply. When this is happening it looks like they are squeezing the breath out of their prey. Which may be happening but this is not the main plan.

-When encountered, will typically retreat or try to get away.
-When threatened , will strike and may leave a bite, usually not a huge deal. Sometimes they will even pretend to be something they are not. I have seen many constrictors shake their tails like a rattlesnake. The mimicry in nature can be fascinating.

Venomous snakes, such as rattlesnakes, vipers, cobras, etc. inject a toxin into the prey and wait for it to die.

-When encountered, will sometimes retreat or try to get away. Like coral snakes for example. Or they bite or strike as a means of defense.
-When threatened, there may be a stand-off of sorts and a defensive strike delivered. Be in the wrong place at the wrong time and death can occur. Even if a cobra kills a human it is still not going to eat a person. Not that my direct experience with snakes involves many cobras. haha.

If a boa constrictor wraps around the neck of a smallish adult it would soon make the person a little light headed,  IF the adult were to permit the animal to do it. But before that could happen, the snake would have to be placed around the neck of the human. So, unless you are taking a nap on the couch with a constrictor and the snake seeks the warmth your body provides, it would have a tough time getting at your neck. Humans are not prey for boa constrictors. This snake that was found is not “that kind of threat” to humans.

The boa constrictor that was reported to be found on the island of Oahu will grow to a length of about 10-12 feet, but only in ideal conditions. Hawaii does have the ideal conditions. This snake can be a danger to small animals, kittens and some cats could become snake food, oh and sleeping chickens don’t stand a chance. I once owned a Burmese Python that went after my 12 lb dog. The snake was about 14 feet long.

One of the news reports that I read stated that theses snake have no natural predators in Hawaii. This is simply not true.  Depending on the size of a snake the mongoose could finally have its day in the sun. After killing off several native Hawaiian birds the mongoose could at last get to do what it was actually brought here for in the first place, and that is, to hunt an invasive species.

In certain situations rats can kill a snake or at least eat the snake’s eggs.  Snakes can be killed by some birds of prey, Pueo for example. And don’t underestimate the human threat to the snake species. And snakes are edible.  So in fact, there are predators on the island. That being said, left unchecked, these snakes would quickly get out of hand here, in Hawaii, particularly at lower elevations, where it is warmer, just like in Florida where the pet trade animals are fully independent.

The saving grace, if it can be called that, for Florida and their pet trade reptile explosion is that it freezes there, sometimes as far south as Ft.Lauderdale. The freeze kills off some of the reptile invasion, slightly controlling populations. However the southernmost part of the state of Florida is faced with a big problem as the weather rarely gets cold enough to impact the reptiles.

People in Florida have released boas and much larger species of snakes than the snake found on Oahu.  South Florida is not only seeing a huge increase in invasive snakes, they also have, Knight Anoles, a large bright green lizard. Parts of the Florida keys have the beautiful Tokay gecko which unlike Hawaiian geckos the Tokay delivers a painful bite. Iguanas are all along the waterways in Ft. Lauderdale and Miami and eating flowers. The curly tailed lizard was carried to Florida from the Bahamas and now eats native anoles, skinks and geckos. A variety of large monitor lizards that became too big and unruly to care for as pets have also been released into the Florida everglades, where they all thrive on birds, rodents, and other reptiles, the larger species of snakes do battle with alligators, sometimes the snake wins and sometimes the gator wins!

Florida’s invasive species problem does not end on land either. The ocean is under attack too. Florida has a terrible invasion of Lionfish on their reefs. These pet trade fish were imported from the Indo-Pacific and when no longer wanted because of the danger and risk associated with the toxins in their beautiful spines they were released into the Atlantic Ocean.

So yes, if Hawaii can learn just one thing from Florida it is this, do not let the pet trade get out of hand. Prevention is better than the cure. This is why Hawaii is so vigilant in monitoring animals and plants that come from elsewhere.  Florida has taught us that animals like exotic fish can pose a threat too. We must learn from Florida’s misfortune because in many ways Hawaii has an even more ideal climate for these animals than Florida. Hawaii is fortunate because it is much more difficult to even get these animals here.

Hopefully, this information will reach anyone that needs it.  There is nothing to be afraid of.  We must educate ourselves and be aware of our surroundings and pay attention and respect to nature.

ConsciousMaui.com was created to promote people and businesses living in harmony with the nature of the Island. If you have not already, please visit us on facebook for daily weather reports, events and much more Maui related topics. Stay tuned, tomorrow’s story will be about a small snake that lives on Maui.