The ʻŌhiʻa  trees (Metrosideros polymorpha), make up approximately 80 percent of the Hawaiian rainforest canopy.  The forest’s canopy filters sunlight and disperses large raindrops into a mist so the moisture arrives on the forest floor more gently not causing damage to delicate plant life down below.

Additionally, these tall canopy trees and their root systems direct water into the ground. Since ʻŌhiʻa trees are much less thirsty than many other plants, they allow much of the rain that falls to pass by them and end up in the aquifer.  The birds are nourished by the flowers and the rough bark is home to tiny bugs, lizards and plant-life, like orchids and moss.

In 2014, the culprit of this die off was discovered to be a fungus, tentatively known at the time as Ceratocystis fimbriata. This fungus already has a reputation around the world for causing problems for coffee, cacao, and mango plants. It’s worth noticing because all three of these crops are being grown on Hawaii’s Big Island and on Maui. 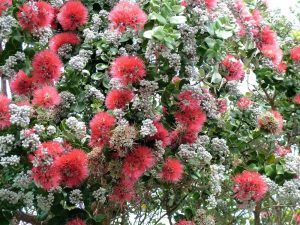 Later still, in what was referred to by researcher scientists as “a surprise twist,” it was discovered that there are two kinds of Ceratocystis fungi attacking the ʻŌhiʻa, neither previously known by scientist,s until the ʻŌhiʻa forest began to die.

What if the the chemicals farmers are spraying to kill weeds are also killing helpful bacteria, bacteria that protect the soil from fungus.  I came across some research that indicated just that. The article states, “Farmers fighting weeds with herbicide” may also be unintentionally killing bacteria that benefit the soil and guard against fungus, new research suggests.” There has to be a better way.

In addition to the fungi problem scientists have confirmed that the fungus killing the forest is being assisted by a non native Ambrosia beetle. The beetle eats the wood and the fungus, carrying the unwanted fungus to other trees.  The waste of the beetle has been tested by scientists and shown to contain 62 percent of the Ceratocytis lukuohia fungus DNA.

Since these two fungi were first discovered in Hawai’i,  Hawaiian names were given to reflect what is happening to the ʻŌhiʻa tree.

1) Ceratocystis huliohia (“huliohia” translates to: “changes the natural state of ʻōhiʻa”)
This fungus causes a canker disease beneath the bark. It spreads slowly throughout the tree, killing off localized areas of water-conducting tissue which eventually causes the tree to die.

2) Ceratocystis lukuohia (“lukuohia” translates to: “destroyer of ʻōhiʻa”)
This fungus is the more aggressive and deadly of the two, causing a systemic wilt. It too chokes off the water supply to the tree, but quickly – often causing the entire crown of the tree to go brown almost all at once.

This information was learned from University of Hawaii News articles.  Here are the links to two of the articles if more details are needed.
1) Two new species of fungi that kill ʻōhiʻa trees get Hawaiian names
2) Ambrosia Beetles Linked to RapidʻŌhiʻa Death