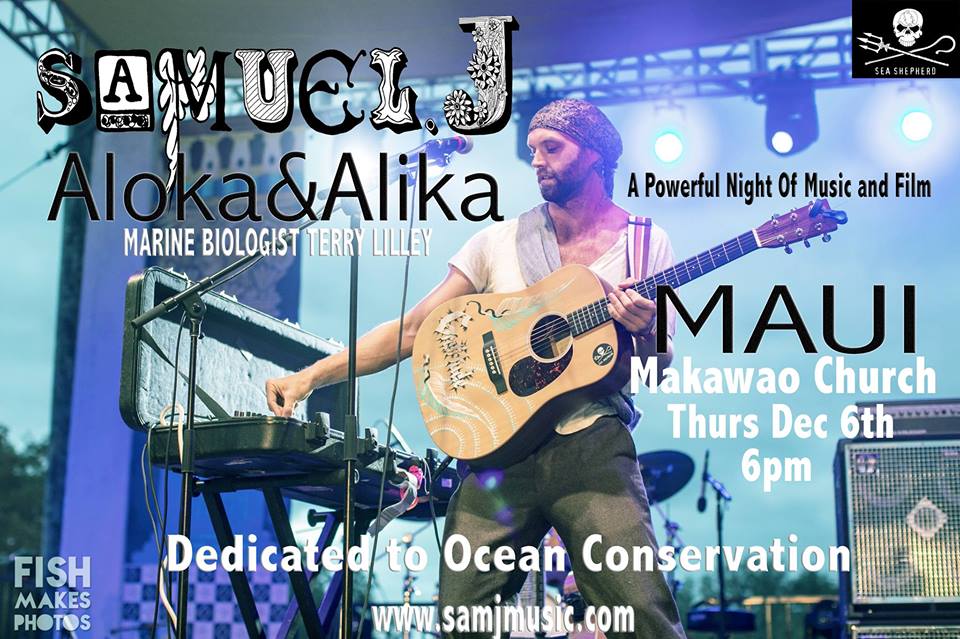 International musician Samuel J is touring the Hawaiian islands, and has partnered with World leading Marine Biologist Terry Lilley to present a series of unique concert events around the world,

International musician Samuel J is touring the Hawaiian islands, and has partnered with World leading Marine Biologist Terry Lilley to present a series of unique concert events around the world, raising awareness about the importance of Ocean Protection.
www.samjmusic.com

”Samuel has toured with Ben Harper and shared the stage with a number of incredible artists such as Donavon F, Michael Franti, Xavier Rudd.. His live performance is so powerfully moving and I feel his music is about to blast off world wide, big things coming here …. ‘
David St Clair BBC XTRA

The event includes a showing of award winning internationally acclaimed films and a colourful concert from Samuel, that features an array of guest performers from Hawaii. The event will also see the release of the NEW SINGLE GUARDIAN, a song that half the proceeds go to Sea Shepherd.
The events films address the critical issues that everyone’s talking about surrounding the disappearing Reefs and our Oceans ever disappearing species.

Its an opportunity for all of us to come together and support the movement to protect our Oceans.
A topic which is of great importance to so many principally because it affects all of us.

This event will take place in the heart of the marine epicenters round the world. Samuel himself is an affiliate with the greatest marine conservation society in the world SeaShepherd.

Samuel has already performed at the Bonzai Pipeline masters in 2017, Waikiki Festival with Dj Thomas Jack and at Wanderlust Turtle Bay 2018.

Don’t miss the opportunity to be a part of this absolutely magical event.