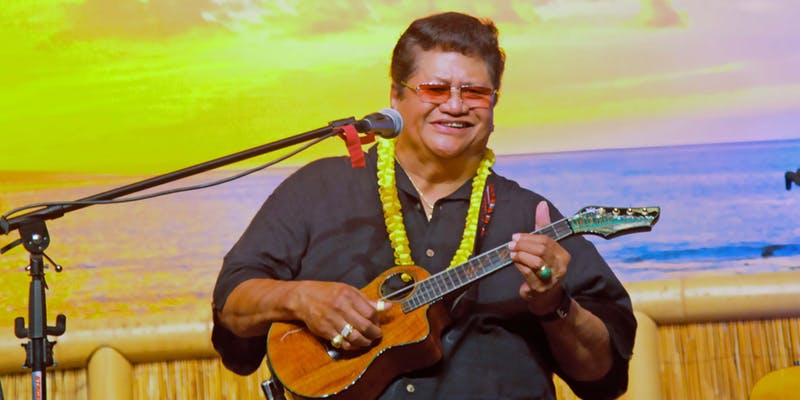 All Show tickets are open seating. We offer two options for purchase:

Show Only Tickets:Tickets are $37.99 in advance online or by phone.Tickets are $45 at the door the night of the show.Show: Aloha Pavilion. Doors open at 6:45pm, show begins at 7:30pm.

All sales are final, no refunds available after purchase.

2011 NEA National Heritage Fellowship Recipient, Ledward Kaapana is Hawaii’s premier master Slack Key guitarist. His inventiveness and fluidity, his versatility in multiple tunings, and his playfulness on stage, make him the leading master of this art, now recognized nationally by America’s most prestigious award for the arts.

Led has been a professional musician for over 40 years. His mastery of stringed instruments and extraordinary baritone and leo ki`eki`e (falsetto) voice have made him a musical legend. His easy-going style and charm have made him a favorite of audiences throughout the world.

Led grew up in a musical family in the tiny village of Kalapana, there were few distractions and everyone played music. It was at the frequent family gatherings that Led learned to play in the old style, watching, listening, then imitating. Chief among his teachers were his mother, Mama Tina Kaapana, and his uncle Fred Punahoa.

As teenagers, Led and his twin brother Ned and cousin Dennis Pavao formed the Hui `Ohana, one of the hottest groups of the 70s and 80s and now legendary among Hawaiian musicians. The 70s saw the blossoming of the Hawaiian Renaissance, and Hui `Ohana was a key part of that return to traditional Hawaiian culture and music. Young Hawaii Sings Old Hawaii, the title of their first recording, was also their statement of purpose. The group produced 14 best-selling albums and made countless hundreds of live appearances, proudly sharing Kalapana’s musical traditions.

Led tours the US extensively. When home in Hawaii, he can be found on Sunday evenings at Kona Brewing Company in Hawaii Kai or once a month on Maui playing at George Kahumoku’s Slack Key Show.