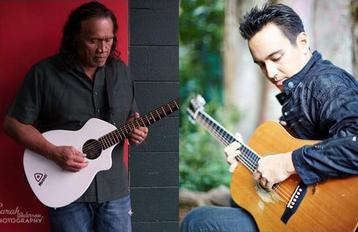 Celebrating the music of James Taylor

The artists will share music and stories from their careers and answer questions, giving the audience an up-close-and-personal seat at the jam session. This concert features Alx Kawakami.

Henry Kapono is a performer who has it all – vocalist, guitarist, songwriter, composer, thrilling performer, audience favorite—and multiple honors and awards, including a Grammy nomination. He has taken home numerous Nā Hōkū Hanohano Awards, including Male Vocalist of the Year, Song of the Year, Single of the Year, and Album & Rock Album of the Year.
Alx Kawakami has made his way around the world playing music for nearly 15 years. Alx has made a name for himself with his songwriting and energetic live performances, along with his ability to compose and sing catchy jingles and theme songs for companies including McDonalds, Forever Living, Suntory, Hawaii Tourism Authority, and Waiola Coconut Water. While living in Los Angeles from 2014-2016, Alx had the chance to work with Grammy Award winning producer, Ken Caillat (Fleetwood Mac), who likened Alx’s voice to James Taylor and began to call him the “Hawaiian James Taylor.”

The Hangin’ with Henry experience can be added to any ticket level for the Artist 2 Artist shows.

10% MACC member discount for show tickets only. Not applicable for the Hangin’ with Henry tickets.