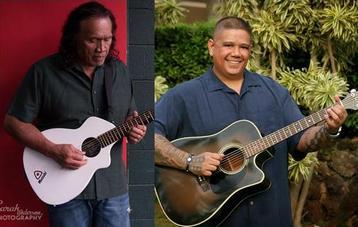 The artists will share music and stories from their careers and answer questions, giving the audience an up-close-and-personal seat at the jam session. This concert features Sean Na’auao.

Sean Na‘auao is a slack key guitarist, vocalist, composer, producer, and founder of independent record label, Poi Pounder. He has received multiple Na Hoku Hanohano Awards, including Island Contemporary Album of the Year for his popular, “Fish and Poi.”  Sean was a founding member of Mana’o Company, a group that made a huge mark on the Hawaiian music scene in the ‘80s and ‘90s. His repertoire runs from the most contemporary of island music to heartfelt traditional Hawaiian mele.

The Hangin’ with Henry experience can be added to any ticket level on any or all of the Artist 2 Artist shows.